Tracy had to go home on Monday to meet her friend in Austin.  The dogs and I were so sad to see her go.  However, it was a very busy week.  We took it easy on Monday and Tuesday with just yoga and walks to the dog park.  On Wednesday, the dogs and I headed to a different spot on the Colorado Trail.  The section has a big climb on to a ridge that gives a great view of the valley.  On the way to the ridge, you pass through beautiful Aspen forests. 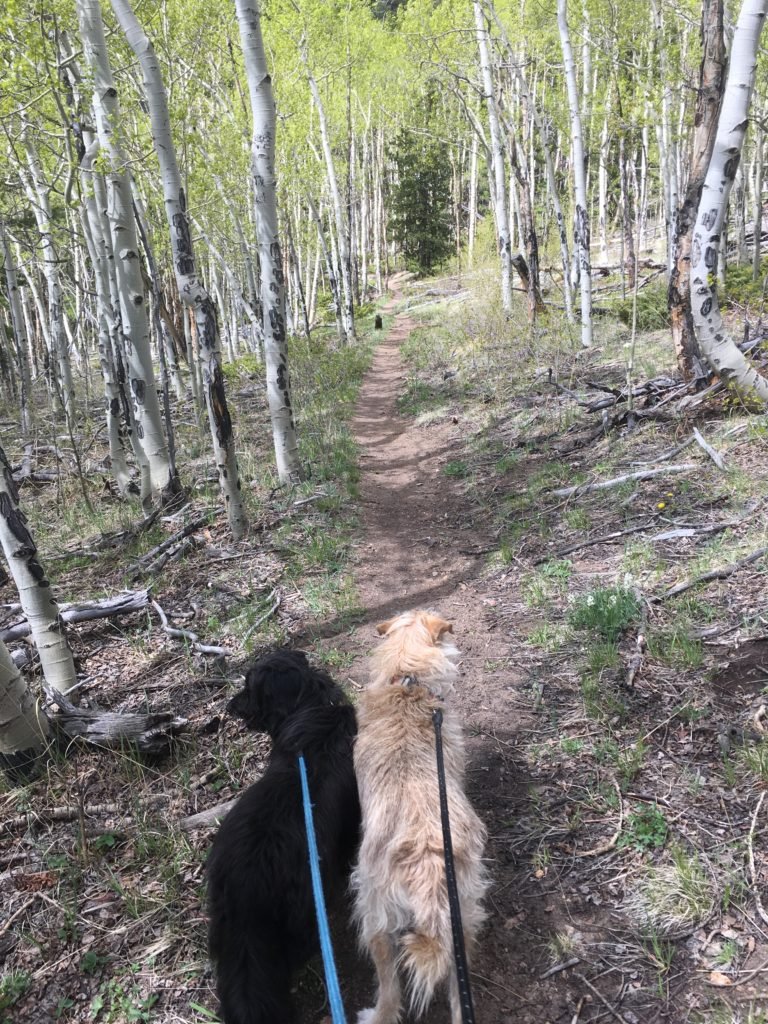 On Thursday, I tried to get across Laws Pass again, but this time from the North.  I had to drive up a tough dirt road to a trailhead, that will be an aid station in the race I’m doing in August.  The trail was incredible, but I started to hit snow around 11,200ft.  I tried to go around it, but ended up getting lost (I found the trail eventually) but I stumbled across this moss covered stream.  It was breath-taking. 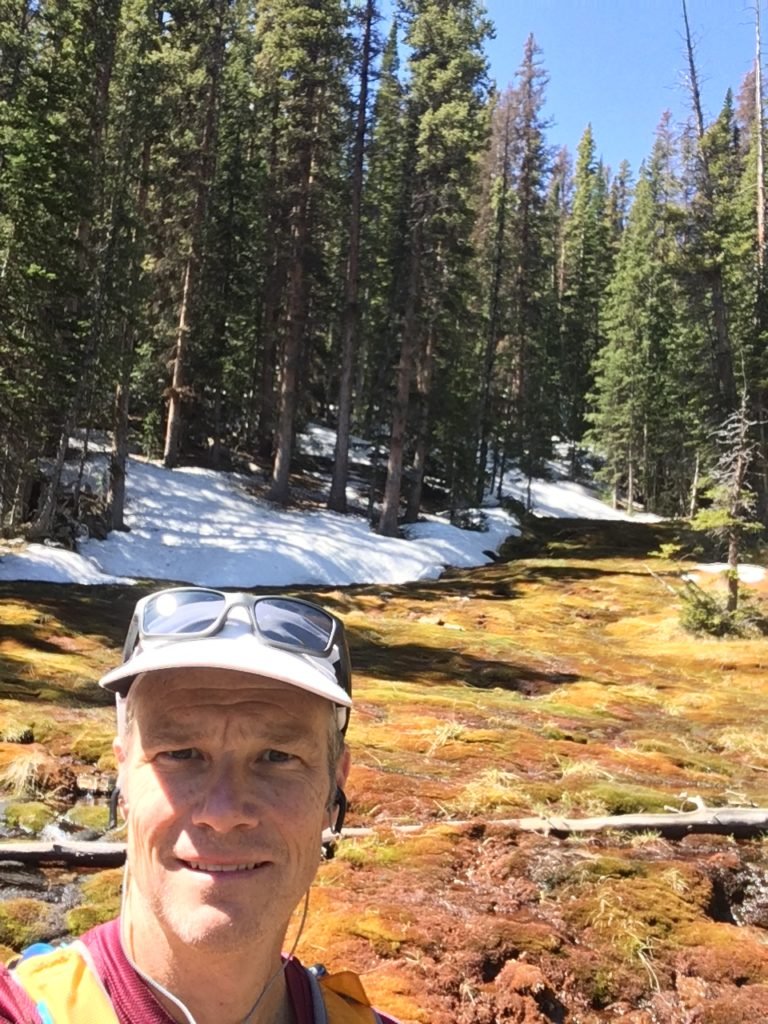 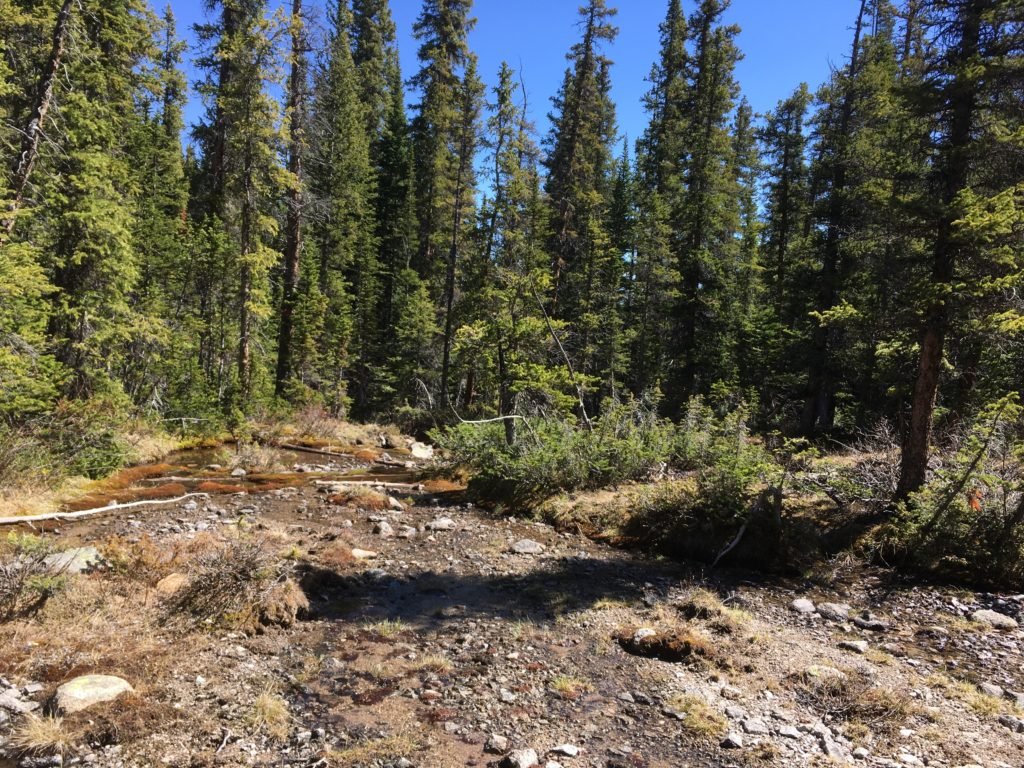 I post holed for a long while and finally threw in the towel about 500 vertical feet below the pass.  The picture below shows the depth of snow on the trail when I turned around. 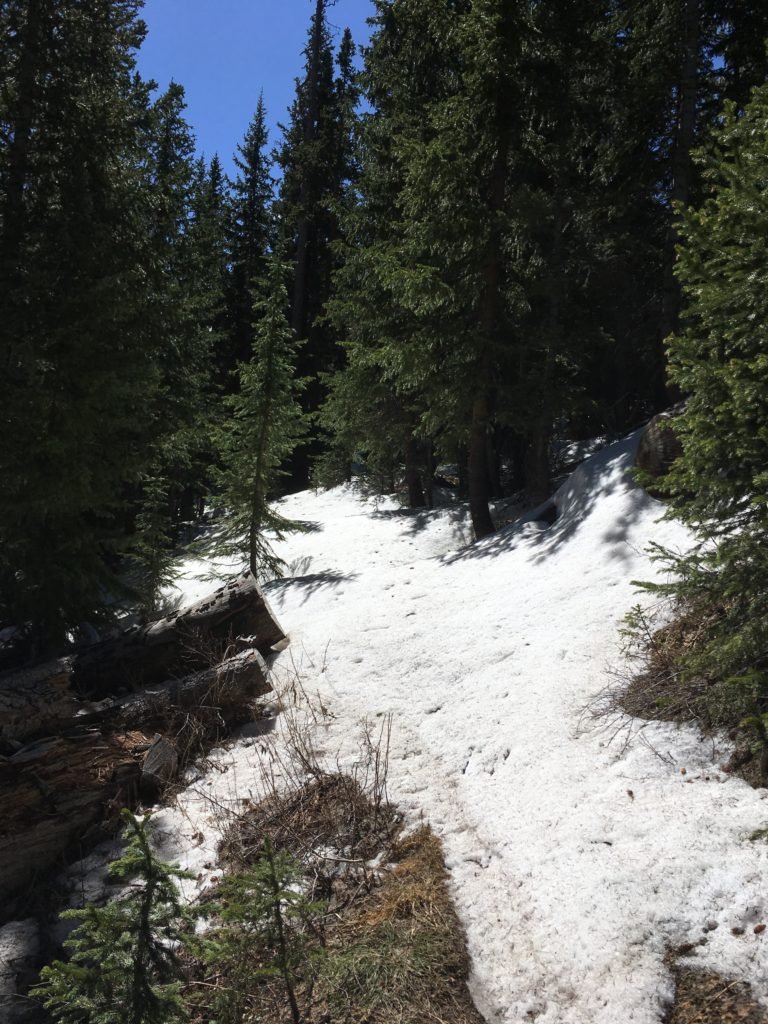 On Friday, I went to yoga for the 3rd this week and then decided to run(ended up being a hike) up Midland Hill.  The hill is the high point on the East side of the river.  It was harder than I thought; the climb was over 1,700ft to reach the top.  The view of BV was incredible. 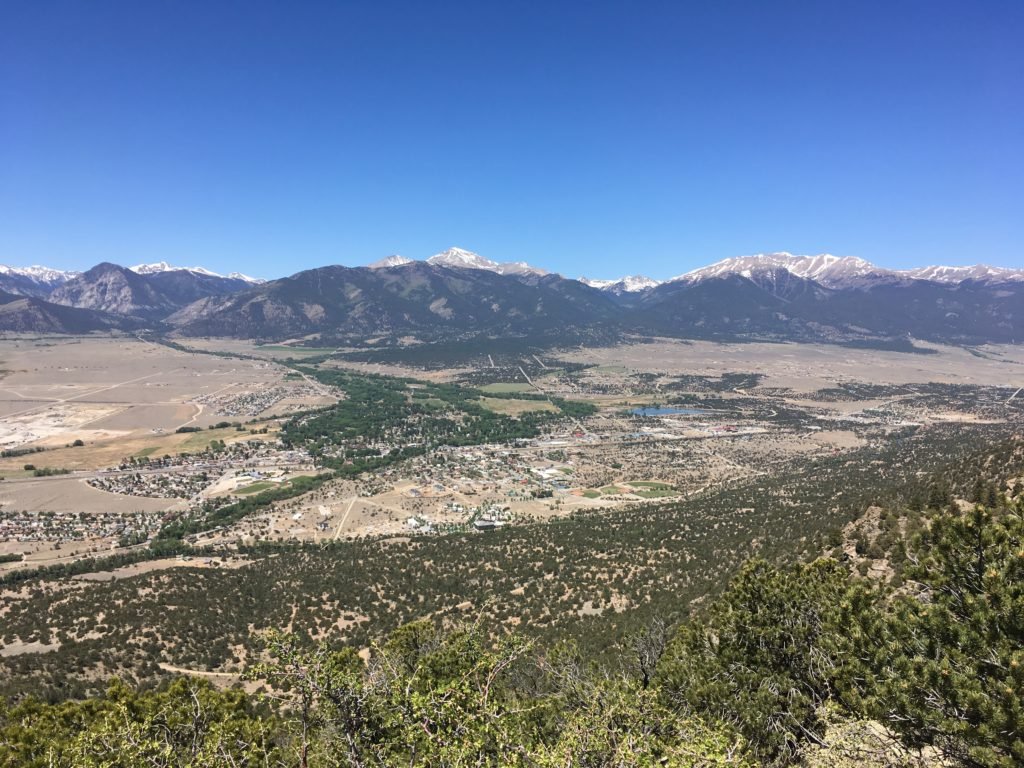 Today, I decided to try the East ridge of Mt Yale again.  I was hoping the snow was melted enough for me to climb the whole ridge to the summit.  The climb was much more challenging than I expected.  There were many pitches and a few of them Class 3.  Lots of scree and big boulders to work across.   There isn’t much of a trail, so I needed to pick a safe route up the spine in the left part of the picture below.  Fortunately, most of the snow was melted so there were only a few detours. 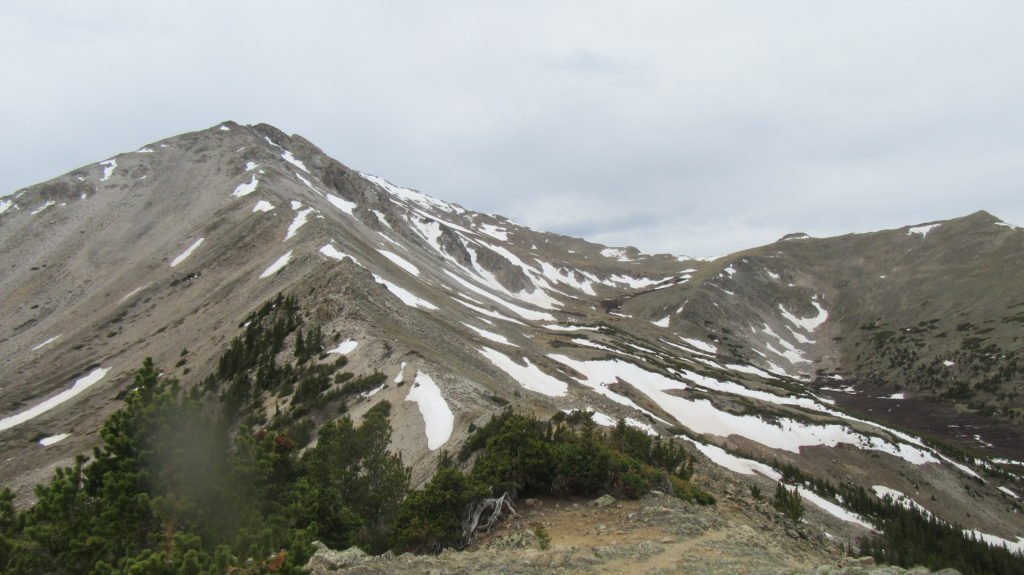 I met a guy from Denver at the start of the spine climb.  We soon passed a mom and son that needed a little route guidance. 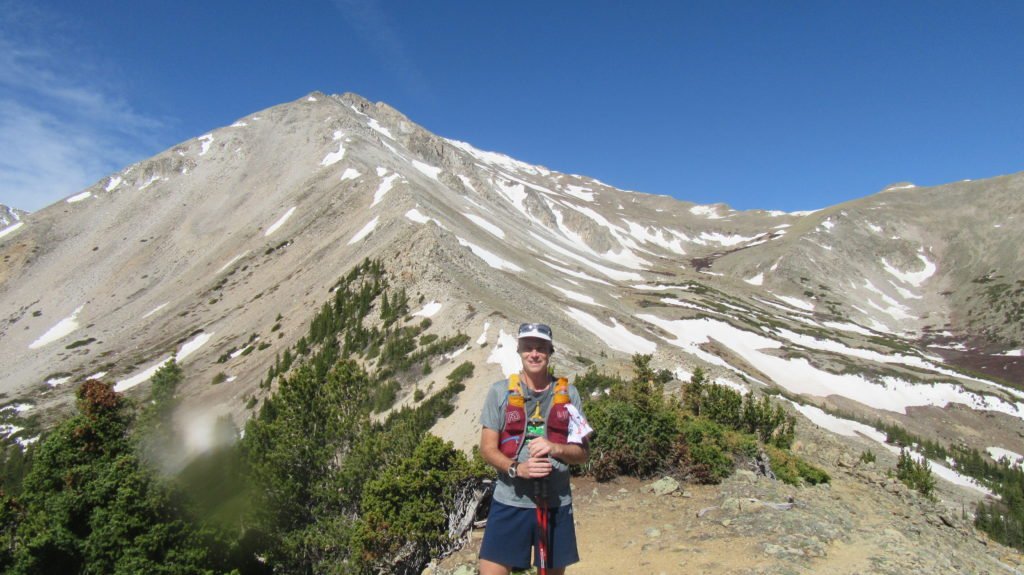 My poles were a hindrance except for the snow fields so I packed them away for most of the climb. 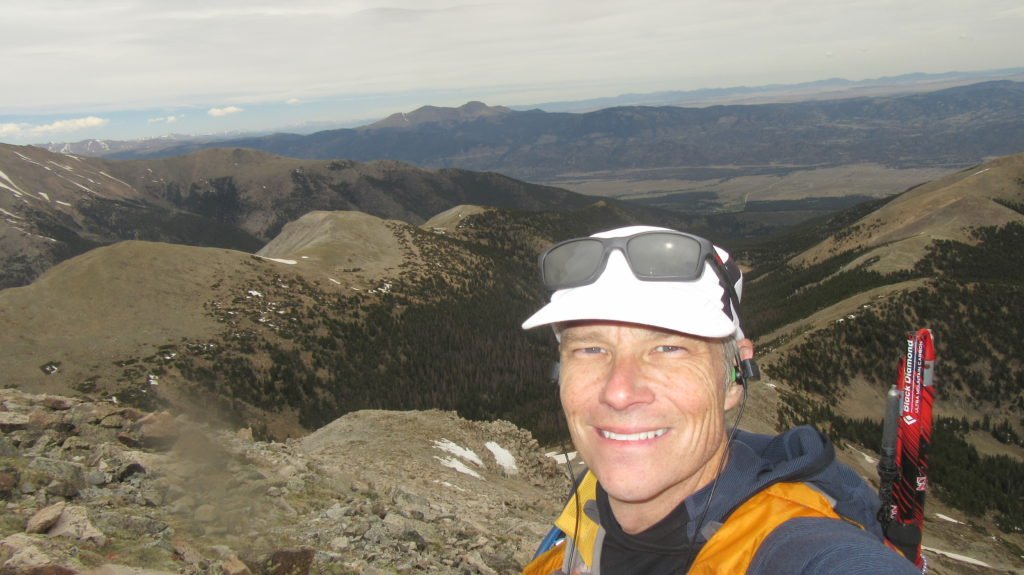 We finally made it to the top at 14,199 ft.  There were a few other people there, but they’d come up the easier route from the South.  We climbed about 5,500 ft in total to get there. 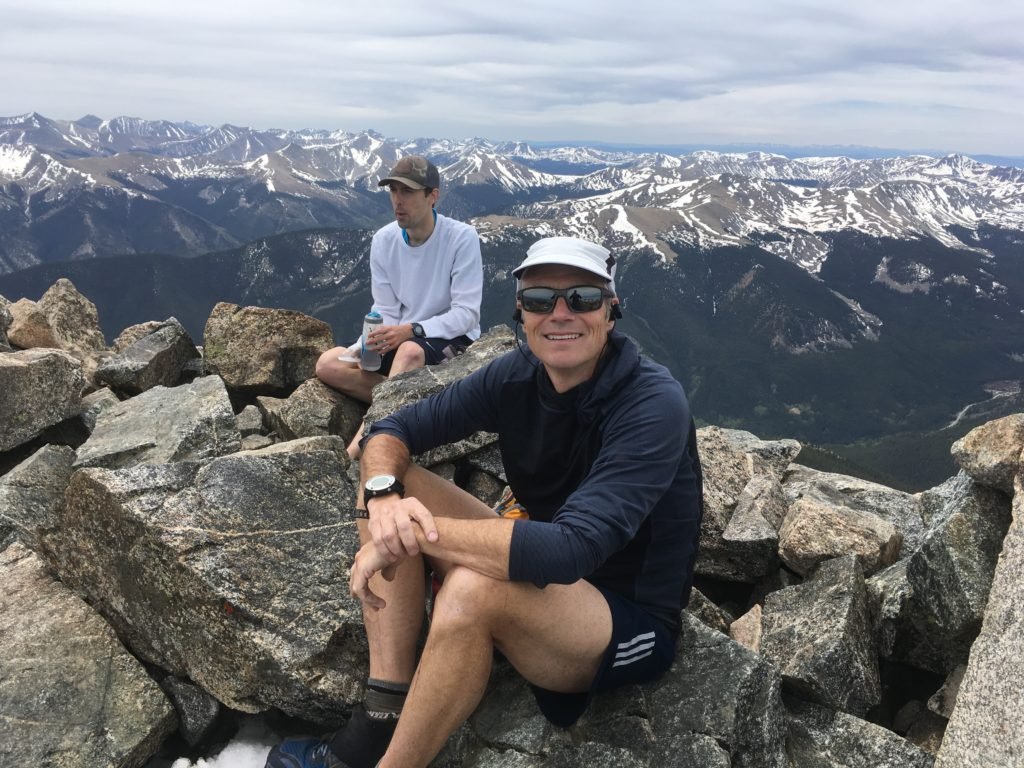 Tomorrow, I’ll take the dogs back to the Colorado Trail for a short hike.  On Monday, I think I’ll give Mt Princeton a shot